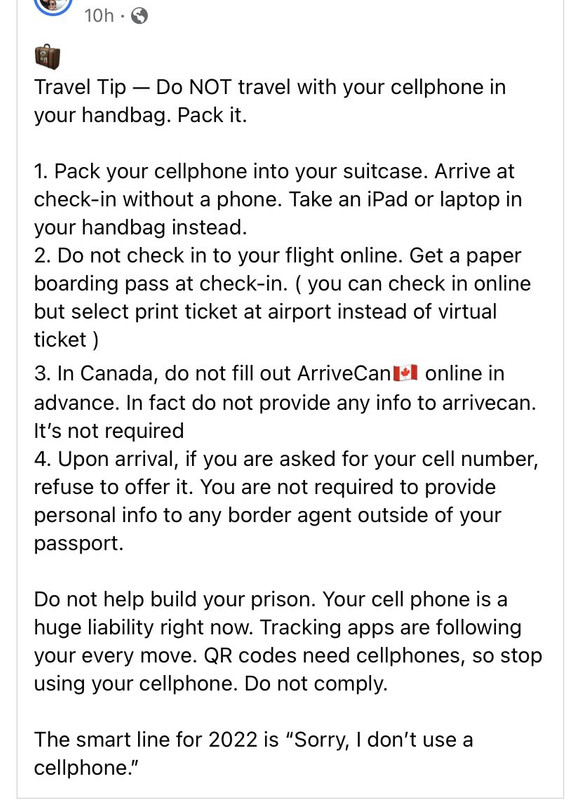 Over 715,000 Canadians who downloaded the Department of Environment’s weather monitoring app had their location tracked by Prime Minister Justin Trudeau’s federal government.

According to Blacklock’s Reporter, the Department of Environment recently revealed in an Inquiry of Ministry that the department’s WeatherCAN application collected the email address, location, and personal information of nearly three-quarters of a million Canadians since the program’s launch in 2019.

Justifying the decision to keep tabs on unsuspecting Canadians, the department ensured the public that “All personal information created, held or collected via this app by the department is protected under the Privacy Act.”

Explaining how the app was able to track citizens, the department informed the House of Commons via an Inquiry of Ministry that “The ‘current location’ function on this app enables the app to provide weather information based on the current Global Positioning System location of your mobile device.”

(Natural News) Brice Patric Ryschon Williams, a Pennsylvania resident, has been charged with multiple counts of felony for possession of child pornographic content and the criminal use of a communications facility. He is being held on a $100,000 bail at Franklin County Corrections following the two-year investigation from the Attorney-General’s (AG) office.

The National Center for Missing and Exploited Children submitted a tip to the Pennsylvania Office of Attorney General’s Child Predator Section after finding child pornography on a Dropbox, where authorities found 49 files of children under the age of 18 performing sexual acts.

A subpoena was issued to confiscate the Comcast ISP address associated with the Dropbox, which was listed as belonging to an Anastasia Diamond or “Ana D.” In July 2020, the Center submitted another ten files of child pornography uploaded by the same user to the AG’s office, and the investigation revealed that nine out of the ten files submitted included child pornography.

On September 17, 2020, authorities seized the Dropbox through a search warrant, and shortly after, another file was uploaded to the service. Following the grant of a warrant, authorities uncovered 135 files of child pornography on the Dropbox registered to Ana D, including the files that were previously tipped to the AG’s office. In December, another file of children engaging in sexual acts was uploaded.

An FBI special agent discovered that the name “Ana D” was a nickname for Anastasia Diamond, the drag queen stage name of the Pennsylvania resident Brice Williams. He was arrested on June 22.

The sexually explicit content in Williams’ Dropbox showed genitalia and young boys performing sexual acts on one another, sometimes with an adult man. Authorities said the boys were under 18 years, but did not specify their ages.

The affidavit also said the photo and video downloads were linked to Williams’ email and home addresses.

Following his arrest, authorities found 25 videos of child pornography on Williams’ phone, but the agent said that this was a small sample of the sexually explicit files they found on his devices.

Who is Brice Williams, aka Anastasia Diamond?

Williams, an HIV case manager, is a prominent activist in the LGBTQ community and has worked with LGBTQ youth. Last year, he was also featured as a speaker at GLO Harrisburg, which is a center that offers a “safe space” for LGBTQ+ youth of color. The LGBT Center of Central PA gave Williams the 2020 Rising Star Award for his work.

Last year, Williams shared that he felt as though his work was “so important because I know there are little kids like me who are queer, who are Black, who are still not able to look up to anyone,” he said.

“So that’s the reason why I got into this line of work. I wanted to make a big impact for folks in my community.”

When investigators arrived at Williams’s Chambersburg home on June 23, he said the two email addresses linked to the pornographic files were his. He also confirmed the phone number listed as the recovery number for one of the addresses to be his. (Related: Another Drag Queen Story Hour pervert exposed as a sex offender… why are public schools subjecting our children to these deviants?)

The pornographic content in Williams’ device was also connected to a Comcast subscription that was registered under his home address. He initially denied downloading child pornography, but later admitted to searching, possessing and sharing child pornographic materials since 2014, before moving to cloud-based storage apps such as Dropbox.

Williams was charged with one count of criminal use of a communication facility in addition to the 25 child pornography charges.

Online court records show that Williams was arraigned on the afternoon of June 23 and taken to the Franklin County Prison. His preliminary hearing is scheduled for July 5 in front of Magisterial District Judge Kristin Nicklas.

On his now deactivated Instagram account, Williams listed himself as an “HIV Community Educator” and a “Licensed Masters Level Social Worker.” It also indicated that he uses both he/him and she/her pronouns. (Related: Grooming at summer camp: Seattle’s MoPOP to host Drag Camp for “youth of all gender expressions and identities.”)

A Facebook post also revealed that he took a strong liking to transgender youth as he shared a story about a child transitioning.

Williams was set to perform in a Drag Show at the Harrisburg Comedy Zone on July 4, alongside other Drag Queens like Poison, Trixy Valentine and Jade Devere.

Watch the video below to see Williams in his drag queen persona.

7amleh-The Arab Center for Social Media Advancement, an Israeli NGO, is one of Meta’s worldwide “trusted partners” that influences its hate-speech policy and enjoys considerable credibility, prestige and even funding from the tech company in return. Yet upon closer inspection, and as a 7amleh conference currently taking place reveals, the organization frequently engages in Jew-hatred and maintains troubling ties to Palestinian terrorism.

These discoveries raise significant concern over how tech companies recruit and review those they entrust with impacting their practices.

As reported by the Daily Wire, 7amleh has collaborated with proxies of the Popular Front for the Liberation of Palestine (PFLP), a U.S.- and E.U.-designated terrorist organization. For example, 7amleh established the Palestinian Digital Rights Coalition alongside Al-Haq and Addameer, both of whom were designated by Israel as terrorist entities in October due to the functions they perform on behalf of the PFLP.

Among 7amleh’s staffers is monitoring and documentation officer Ahmad Qadi at 7amleh, who still works for Al-Haq to this day. Ola Marshoud, the digital security trainer at 7amleh, was sentenced by Israel to seven months imprisonment in 2018 for actions as a member of Hamas’s Islamic student bloc.

7amleh and its staffers have also voiced support for terrorists such as PFLP leader Ghassan Kanafani, whom the organization lauded as a “distinguished Palestinian personality.” Nadim Nashif, 7amleh’s director and co-founder, called convicted PFLP airplane hijacker Leila Khaled, a “resistance icon.” Such blatant anti-Semitism and support for terrorism should not be acceptable to Meta.

Despite the evidence above, Meta still considers 7amleh one of its “trusted partners” in pursuit of their “shared goals” to keep harmful content offline. Likewise, as a member of Twitter’s Trust and Safety Council and one of a mere 20 focusing on digital and human rights, 7amleh “engages Twitter on priority challenges and policy issues in the realm of human rights, free expression, civil liberties and defending the digital rights of people on Twitter.”

In addition to Meta arguably platforming a terror-supporting NGO, three of its representatives operating in the spheres of the Middle East, public affairs and public policy, along with six other officials from Twitter, Instagram, WhatsApp and Clubhouse, are gracing 7amleh’s three-day annual Palestinian Digital Activism Forum this week alongside Rep. Rashida Tlaib (D-Mich.) and U.N. Special Rapporteur Mary Lowler.

This respectable guest list should not be surprising considering 7amleh’s trusted status among Twitter and Meta (which also owns Instagram and WhatsApp). What is more surprising, however, is that 7amleh has recruited conference speakers with deep and abiding ties to Palestinian terror, and that fact hasn’t stopped these companies from lending their names and representatives to the event.

For example, there is Omar Nazzal from the Palestinian Journalists Syndicate, who was held in administrative detention by Israeli law enforcement in 2016 due to conducting unlawful activity for the PFLP. Hussein Hammad from the PFLP-linked Al Mezan Center for Human Rights, who according to the research institute NGO Monitor, received an award from a PFLP branch named for PFLP terrorist Abdullah Mohsin in honor of completing his master’s degree.

In light of all this, how can Meta and Twitter entrust 7amleh to help them fine-tune policy, algorithms and community standards? Better yet, how did the group secure this status in the first place? Are there similarly questionable organizations that enjoy the vaunted “trusted partner” status? These questions are all the more pertinent as tech platforms fall under increasing scrutiny for their allegedly selective enforcement measures and biased behavior.

Even the slightest bit of research would have shown that 7amleh is not fit to hold such an important position with Meta and Twitter. Although tasked with influencing their approach to human and digital rights, 7amleh itself seems to be guilty of promoting terrorism against Israel and anti-Semitism.

The realization that an organization entrusted with influencing online hate-speech policy is itself engaging in it makes the exponential spread of anti-Semitism on social media over these last few years far more understandable.

If the terror-supporting, Jew-hating fox is tasked to define anti-Semitism and put an end to it, no one should be surprised when the exact opposite transpires. Users deserve to know more about 7amleh and other “trusted partners” who affect the world’s leading tech platforms, which, in turn, affect the public writ large.

Adv. Yifa Segal is an expert in international law, former chief of staff of Israel’s Ambassador to the United States, and former chair and CEO of the International Legal Forum.